Odds for Up And Coming Stakes 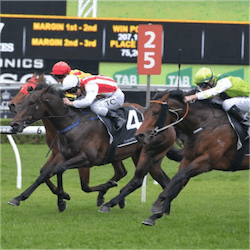 Preview of Up And Coming Stakes’ Odds

Mighty and Power Race Day this Saturday is also a community race day, so there is plenty going on at Royal Randwick to attract racing fans. Online punters will be able to join in the action at betting sites, and there are several races that could turn into intensely fought close finishes.

The 1300m Group 3 Up And Coming Stakes, a quality handicap for 3-year-old colts and geldings, may prove to be one of them. Run since 1979, the race now carries total prize money of $150,000, and it is always of interest to betting fans looking for the top new gallopers to back in the months to come.

The favourite in current betting, at around $4.40, is Calculated, a colt sired by So You Think out of Calchris. He’s only raced three times: running sixth of 11 on debut over 1100m at Rosehill in February, winning the Tab Maiden Handicap over 1200m at Canterbury in July, and returning to Rosehill 10 days later to finish second of seven in the 1400m #theraces Handicap.

Calculated is by no means a dead cert, however. Gerald Ryan-trained Trapeze Artist, currently on a career record of 5: 2-0-1, is right behind him in the betting, at $4.80. After his win at Canberra’s Group 3 Black Opal in March, he finished sixth in the G1 Golden Slipper and third at the G1 Sires’ Stakes, both at Randwick.

Teofilo colt Sanctioned is next in the Up And Coming Stakes betting, at $5.50. He ran third of nine in his debut race at Warwick Farm in March, and took his first win three weeks later over 1200m at Newcastle.

Dracarys, sired by Snitzel out of Nocturnelle, is at $7.00. Trained by Peter and Paul Snowden, the colt won on debut over 1000m at Warwick Farm in February, and followed up at Randwick with a fifth of nine in the 1200m G2 Skyline Stakes, and a second of six in July’s 1200m ATC Member for a Day Handicap.

Assimilate Best of the Outsiders

The rest of the field comprises Assimilate, at $9.00, Gold Standard and Eshtiraak each at $10.00, and Cuba, Hypnotist, Toga Picta, Island Missile, Ace High and Coulthard, all at $14.00 or higher.