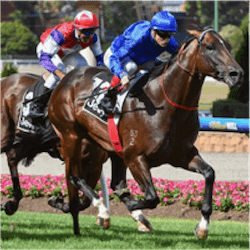 Australian horseracing fans will be looking forward to betting on the William Reid Stakes, in the final night racing meeting of Melbourne’s autumn season at Moonee Valley on March 24. The night run under lights isn’t the only thing that makes the William Reid special; the 1200m Group 1 race has a field restricted to 14 or fewer, and the tight Moonee Valley turns are a real test for the best sprinters.

However, the 1400m Futurity Stakes and 1100m Oakleigh Plate are iconic races in their own right, and they are also useful for spotting the champion sprinters on a winning streak.

Trainer Darren Weir has not yet indicated whether Black Heart Bart will be entered for the William Reaid yet, but if he does make the final field, he is likely to attract heavy betting. Tosen Stardom, his 6-year-old entire stablemate also trained by Weir, lost by a nose in the Futurity Stakes, so he could also be worth a punt, if he makes the field at Moonee Valley.

The fastest sprint on Blue Diamond Stakes Day is always the 1100m Oakleigh Plate, also with a purse of $500,000. Race favourite Extreme Choice, a 3-year-old colt with a 4-0-1 record in seven starts, came in a disappointing third. However, punters might want to try him again over the slightly longer race at Moonee Valley, as he was challenging hard at the finish of the Oakleigh Plate.

The Oakleigh Plate winner and runner-up, 5-year-old mare Sheidel and 4-year-old gelding Faatinah, will also be worth a punt, if they make the William Reid Stakes field.