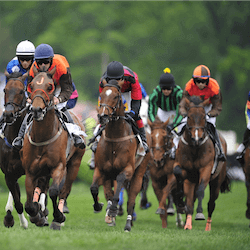 One of the joys of online sports betting is the way it allows Australian racing fans to keep an eye on several meetings at once. They’ll appreciate that feature especially over the next few weeks, because Spring Carnival racing is providing excellent betting options all over the country.

Australia’s top provincial racing club gets their Spring Carnival action going this Friday, with Newcastle Cup Day, followed by Ladies’ Day at Newcastle Racecourse on Saturday. There are four Group 3 races on Friday that will entertain punters, starting with the 1400m Tibbie Stakes for fillies and mares three years old and older, run at set weights and penalties.

Then there’s the 1600m Spring Stakes, for 3-year-olds at set weights, and the open 1500m Cameron Handicap. The titular race of the day is likely to attract the most attention: the 2300m Newcastle Gold Cup, another open handicap, with a purse of $175,000.

Sydney’s Spring Carnival action this week is at Royal Randwick on Saturday, for Colgate Optic White Stakes Day, as George Main Stakes Day is known under sponsorship. The George Main Stakes, also renamed after the sponsors on the card, will be the main event: a Group 1 weight-for-age 1600m open handicap with prize money of $500,000. Strong contenders to watch should be Wynx, Foxplay and Invincible Gem.

The Shorts is an iconic Gr. 2 race on George Main Stakes Day, an 1100m sprint for 3-year-olds and older, and 7-year-old gelding Chautauqua might be worth a punt this year. There’s a big field for the Tea Rose Stakes at Randwick on Saturday, another Gr. 2 race, for 3-year-old fillies at set weights over 1400m.

The 2000m Gr. 3 Kingston Town Stakes and the 1400m Bill Ritchie Handicap, both for 3-year-olds and older, will also keep the betting fans poring over the Randwick race card.

On Saturday, 23 September, punters will be following the Melbourne action at Caulfield. The two big Gr. 3 races of the day are the 2000m Naturalism Stakes, an open handicap, and the 1200m How Now Stakes, for 4-year-old mares and older. You can get your bets in on this race and all others at Crownbet, a leading Aussie online bookmaker.

There’s lots more racing at several tracks around Australia for the rest of the month, but another race betting enthusiasts will want to look out for is the Hill Stakes. The 1800m Gr. 2 open weight-for-age race, with a purse of R500,000, will be run at Randwick on 30 September.