Scoping Out the William Reid Stakes 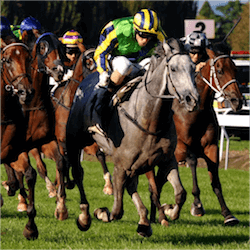 Australian online betting fans still have three weeks of racing before the Group 1 weight-for-age William Reid Stakes on March 22; the final night-racing meeting at Moonee Valley before the autumn action moves to Sydney. The tight Moonee Valley turns and restricted field reliably deliver an exciting sprint over 1200m in this Group 1 race for 3-year-olds and older, creating good betting options.

The William Reid Stakes field is limited to 14. It has not been finalised, but there are two Group 1 sprints over the next few weeks that punters will also be betting on, that simultaneously provide a useful opportunity to study the form of some of the William Reid hopefuls.

The 1100m Oakleigh Plate will be run at Caulfield on Blue Diamond Stakes Day this Saturday, and the Newmarket Handicap over 1200m is at Flemington on March 11. Both have fields that might produce a William Reid winner, but three names stand out.

Fell Swoop has had five starts since he won Brisbane’s Victory Stakes over 1200m at Doomben last March, in which the 5-year-old has achieved one sixth, one fifth, two thirds, and one second: although that was, significantly, over Moonee Valley’s 1200m in the Group 1 Manikato Stakes last October. His runs at Caulfield and Flemington may decide whether he continues to the William Reid.

Winner of both the William Reid Stakes and the Oakleigh Plate in 2016, 7-year-old Flamberge is likely to be back at Moonee Valley on March 22. After falling off at the end of the 2015-16 season, he seems to be making a comeback; he managed a fourth in both the Black Caviar Lightning and Kensington Stakes. Betting enthusiasts will be watching him closely on Saturday, as well as in the Newmarket Handicap.

Up-and-coming 3-year-old Extreme Choice is the $3.80 favourite for Saturday’s Oakleigh Plate: he has an impressive record so far of four wins from six starts. He should also be a contender at Flemington on March 04, and he will have a lot of punters backing him for the William Reid Stakes on March 22 if he is included in the final draw.

However, trainer Mick Price is waiting until after the Newmarket Handicap, before he decides if Extreme Choice continues to the William Reid, or April’s TJ Smith Stakes at Randwick in Sydney.