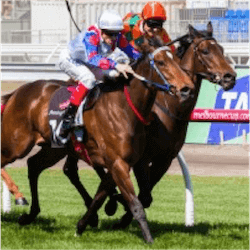 Spring isn’t quite here yet, but the racing season in Melbourne is warming up again. This Saturday’s Sir John Monash Stakes at Caulfield should entertain punters looking for a blistering sprint. The 1100m Group 3 race is a fine test of gallopers headed for Group 1 later in the season, and the small field of 10 confirmed on this year’s final card makes the betting options exciting.

The current favourite is Supido, in pursuit of his first stakes win, being offered on betting sites online at around $2.15. The 5-year-old entire, trained by Mick Kent, is returning after a spell, following his disappointing 13th-of-14 finish at Rosehill in the Group 1 The Galaxy over 1100m in March.

Nevertheless, with six wins, one second and two thirds from 12 starts, all of them over 1200m or less, he’s looking likely to come back strong after a rest.

Second-favourite to win the Monash is Chocolate Holic, a Perth sprinter that has recently switched to trainer Darren Weir’s stable, inviting comparisons with his other great WA galloper, Black Heart Bart. The 4-year-old gelding will fetch around $5.00 if he wins the Monash, and his record of 11: 7-3-0 indicates that he might be up to the task.

However, all of Chocolate Holic’s wins have come over distances of 1200m-1600m, so he might not have time to get into his stride in the shorter race. Even Weir has admitted that at 1100m, the Monash may be too sharp for him. He could be a better bet in the Bletchingly Stakes over 1200m at Caulfield on 29 July.

Lord of the Sky, the 6-year-old entire that won the Sir John Monash Stakes in 2014, will be competing in the race for the fourth year in the row, chasing his second win. He’s also returning after a spell, having failed to secure a position at stud last year.

His last win was in the Bletchingly Stakes last July, shortly after he’d run fourth in the 2016 Monash. He’s at his best in the short sprints, so at $5.50, he could be worth a punt on Saturday.