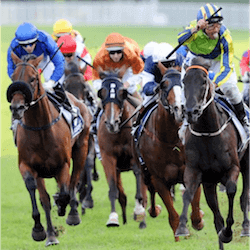 Saturday, 19 August, provides Australia’s online betting enthusiasts with plenty of spring racing action from Royal Randwick’s Mighty And Power Race Day. It’s a community race day that should attract plenty of locals to the track, and it offers punters at online betting sites quality races like the $250,000 Group 2 Warwick Stakes.

The 1400m weight-for-age race for 3-year-olds and older is designed for a field of 16 acceptors with 4 emergencies. However, it has attracted an unusually small field of 10 this year, so Racing Australia has extended nominations until 11am on Tuesday, in the hope of bulking out the competition.

Winx Top of the Betting

Champion 6-year-old mare Winx is the $1.10 favourite to win the Warwick Stakes. She has been on a spell since she won the Group 1 Longines Queen Elizabeth Stakes at Randwick in April. Just as he did after her spell before last year’s Warwick Stakes, trainer Chris Waller brought her to Randwick as a visitor last Saturday, just to get her used to the racing atmosphere again.

He’s sticking to a formula that works: Winx has been undefeated for more than two years, winning her last 17 consecutive races, for a career record of 27: 21-3-0. In her last 14 wins, she has been ridden by Hugh Bowman, and with the in-demand jockey back from his suspension, the pair will be hard to beat on Saturday.

Winx’s Stablemates among the 10 Confirmed

There will be three Waller-trained stablemates competing with Winx in the Warwick Stakes. 4-year-old mare Foxplay, at around $11.00, is probably the biggest threat of the three. 5-year-old New Zealand gelding Antonio Giuseppe is at around $26.00, with another New Zealand gelding, 9-year-old Who Shot Thebarman, an outsider at $201.00.

Invincible Gem, the 4-year-old mare trained by Kris Lees with an impressive career record of 10: 5-3-0, is second favourite for the Warwick Stakes, at $10.00. The remaining options at the time of writing are Ecuador at $21.00, Inference at $31.00, Harper’s Choice at $36.00, and Allergic, Red Excitement and Zanbagh, all at $101.00. You can place your bets online at Luxbet and sit back and watch to see whether you are a winner.