Townsville 400 May Shake Up Supercars Futures 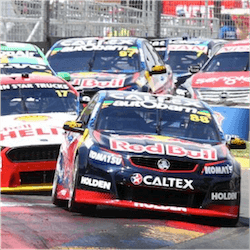 Australian petrolheads are halfway through the annual Supercars Championship, a feast of V8 action that comprises 14 rounds at circuits all over the country. Saturday and Sunday bring Round 7; like most of the rounds, a two-leg affair: the Watpac Townsville 400 on the Townsville street circuit in Queensland.

It’s the first round to be held in Queensland this year, and with the top three drivers on the ladder currently within 20 points of each other, and the top eight separated by only 427 points in total, Townsville could see them shift positions. By Sunday, punters could see the Top 8 reshuffled. This will in turn affect futures odds on bets to win the championship outright.

New Zealander Fabian Coulthard is one of DJR’s star drivers, joined this year by fellow Kiwi Scott McLaughlin, moving across from Garry Rogers Motorsport. Both are in Ford FG X Falcons, and Coulthard is currently top of the drivers’ ladder with 1,330 points, followed by McLaughlin on 1,320. With 2,685 in total, DJR also leads the teams’ ladder.

Melbournian Jamie Whincup and another New Zealander, Shane van Gisbergen, are the leading two drivers for Triple Eight, in Holden VF Commodores. Whincup is currently third with 1,314 points, followed by Van Gisbergen on 1,152, and Triple Eight is lying second on the teams’ ladder, with 2,466 team points.

In terms of the futures betting for an eventual Supercars Championship outright winner, the four front-runners are pretty close. McLaughlin is the favourite at present, at around $1.60-$1.80. Some sites are offering Coulthard at $2.00, although others have him on a par with McLaughlin at $1.60.

Whincup is being offered at around $3.00, and Van Gisbergen at between $5.00 and $5.50, although some sites reckon he’s an $8.50 outsider. What punters shouldn’t forget, however, is that Whincup is the king of the Townsville 400: he’s won a leg nine times in the past eight years, with a clean sweep in 2012. He’s sure to be a contender on Saturday and Sunday, and will hope to finish a little closer on the ladder to the two DJR drivers.