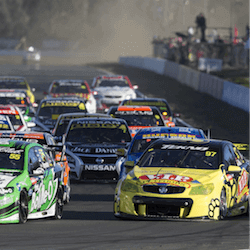 Motorsport fans following the 2017 Virgin Australia Supercars Championship won’t want to miss Races 15 and 16 next week, on 29-30 July at Queensland Raceway in Ipswich. The two Ipswich SuperSprint races will be about more than the three-way tussle at the top of the ladder between Triple Eight’s Jamie Whincup and DJR Team Penske’s New Zealand drivers, Fabian Coulthard and Scott McLaughlin.

Betting enthusiasts will also be keen to see if Whincup’s fellow Aussies, Mark Winterbottom and Craig Lowndes, can parlay their winning records at Ipswich into a leap up the ladder. They are currently placed sixth and seventh respectively in the 2017 Supercars drivers’ championship, but Whincup’s Triple Eight teammate Lowndes is the Ipswich record holder, with six titles to his name, including 2016.

Winterbottom isn’t far behind, on four Ipswich SuperSprint wins: the first three for Ford Performance Racing and his most recent, in 2015, for his new outfit, Prodrive Racing Australia. In fact, the last time anyone who wasn’t Lowndes or Winterbottom won the event, it was Dick Johnson Racing’s James Courtney, in 2010. So either of the two drivers could upset the applecart next weekend.

The last two Supercars races, in the Watpac Townsville 400 over 8-9 July, saw a dramatic reshuffle at the top of the drivers’ ladder, when McLaughlin and Whincup won a race each. Coulthard, then in first place in the championship, struggled with two bad qualifiers and finished 11th and 21st. The weekend ended with McLaughlin in the top spot on 1,608 points, Whincup right behind him on 1,602, and Coulthard now third on 1,450.

Next is another Triple Eight Race Engineering team member, Shane van Gisbergen, like Whincup and Lowndes driving a Holden VF Commodore, on 1,377 points. Chaz Mostert, in a Ford FG X Falcon for Rod Nash Racing, has 1,257 in fourth. With 1,173 and 1,104 points respectively, Winterbottom and Lowndes are right behind him.

A win in a Supercars race nets a driver 150 points, so depending on how Van Gisbergen and Mostert fare in next week’s races, a double win in his Ford Falcon for Winterbottom, especially, could catapult him one or two positions up the ladder. With McLaughlin the $1.20 futures favourite to win the 2017 drivers’ championship, Whincup at around $2.50 and Coulthard at $3.50, Winterbottom may be worth a $200.00 outsider bet at this point. Get your bets in at Ladbrokes and see if you can back a winner!