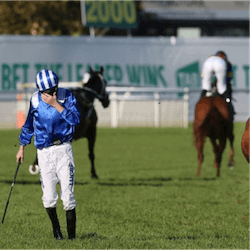 Sydney Cup Called Off after Tragedy

The Group 1 Sydney Cup over 3200m was, for many Australian betting fans online, the key stayers race on the card for Queen Elizabeth Stakes Day at Royal Randwick on Saturday. Unfortunately, a no-race was declared after 6-year-old horse Almoonqith broke a leg on the first circuit of the track, throwing jockey James Doyle and also unseating Blake Shinn on Who Shot Thebarman.

Although neither jockey was injured and most of the field made it past the stricken horse without incident, with Who Shot Thebarman running loose and riderless on the track, Racing NSW stewards had no option but to call a no-race. This did not impress jockeys like Damien Oliver, Corey Brown and Kerrin McEvoy, but under the circumstances, it was the safest decision.

Almoonqith sadly had to be destroyed, but Who Shot Thebarman appears unscathed and neither jockey was seriously hurt. At the time of writing, racing fans were awaiting the announcement of the rescheduled Sydney Cup. It will be run at Randwick either on Anzac Day, or April 22.

There are four Group 1 races run at Randwick on Queen Elizabeth Stakes Day, so the postponement of the Sydney Cup did not hit serious punters too heavily. Despite the soft track, though, it was a day for favourites. New Zealand’s Bonneval won the 2400m Australian Oaks for 3-year-old fillies at a starting price of $4.30, ridden by Hugh Bowman.

There were no surprises in the main Group 1 race: the $4-million Queen Elizabeth Stakes over 2000m. At $1.20, champion Sydney mare Winx was at her lowest starting price ever, and the 5-year-old proved the bookies correct. She romped home by more than five lengths, to give Bowman his second winning ride of the day.

Winx now has an unbroken streak of 17 wins in succession, so within the next year or two she could hold the all-time record. She is currently fourth in the historic rankings, after Black Caviar on 25, Desert Gold on 19 and Ajax on 18. Her prize money on Saturday also puts her within $2-million of the highest career earnings ever.

Punters were somewhat subdued for the final Group 1 race on Saturday, the Coolmore Legacy Queen of the Turf Stakes over 1600m, as it followed immediately after the Sydney Cup tragedy. Some would no doubt have been cheered up by Foxplay’s surprise win at $7.70, relegating the favourite, Silent Sedition, to fourth place.