Takedown a Strong Contender for Doomben 10000 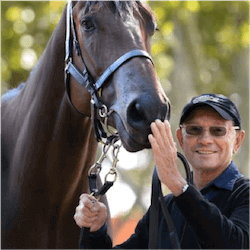 Takedown a Contender for Doomben 100000

Gary Moore doesn’t believe that Takedown will beat Fell Swoop in the upcoming Victory Stakes. However, he does rate his chances in Doomben 10000 on the 13th of May.  The Group 1 weight-for-age race attracted 13 starting entries including four-year-old Takedown as well as Fell Swoop who placed third at the 1200m TJ Smith Stakes. Moore has certainly enjoyed much success in Australia since returning from Hong Kong in 2014.

In November last year, Moor celebrated a win at the Group 1 Winterbottom Stakes in Perth with Takedown doing the honours. Gary then travelled to Sha Tin finishing in sixth, two lengths behind the winner Aerovelocity who won the Group 1 Hong Kong Sprint. When Takedown returned from Hong Kong, he ran second last in the group 3 Hall Mark Stakes at Royal Randwick.

Moore Believes that Takedown is better suited for the climate in the sunshine stake and will do well in weight-for-age conditions. As well as the Victory stakes, Moore has his eye on the Group 1 Brisbane races coming up later this year. Speaking to the press, Moore said that Takedown has come a long way since his first run back, he has dropped weight and his coat is brighter. After the quarantine, he lost a lot of weight but he is starting to look like himself again.

Despite his confidence in Takedown, Moore is realistic about his chances of winning the Victory Stakes. He feels that Fell Swoop is in superb form and has the race fitness advantage on his four-year-old. At last year’s Queensland winter carnival, the galloper took first at the Group 3 Gold Coast Guineas before picking up a second to Counterattack in the Group 3 Fred Best Classic.

This coming Saturday will be his first run back in Brisbane though since placed 14th in the Goup 1 Stradbroke Handicap at Eagle Farm. In this upcoming season, Moore has eyes on the Group 1 Doomben 10000, then the Group 1 Darley Kingsford-Smith Cup just two weeks later. The early entry odds for the Doomben 10000 are as such: