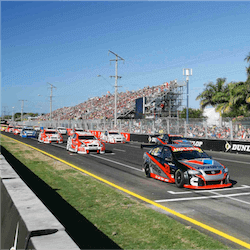 The Watpac Townsville 400, held on the Reid Park street circuit in the Queensland town, provided Supercars Championship action for Australian betting enthusiasts last Saturday and Sunday. By the end of the weekend, south Brisbane’s DJR Team Penske were still top of the teams’ championship, but their star driver, ladder leader after Race 12 Fabian Coulthard, had slipped two places in the rankings.

It wasn’t all bad news for DJR, though: the man who unseated Coulthard in Race 13 at Townsville was his teammate and fellow New Zealander, Scott McLaughlin. Triple Eight Race Engineering’s Jamie Whincup snaffled the lead at the start, but McLaughlin wrestled it off him in the final turn of Lap 3. He held on for the remaining 67 laps, finishing first, with Whincup four seconds behind him.

Prodrive Racing Australia’s Mark Winterbottom was third. Coulthard, meanwhile, started ninth on the grid after poor qualifiers, dropped back to second-last after some jostling in the pack, but managed to struggle back to 11th. Both McLaughlin and Whincup leapfrogged him on the points ladder to lie first and second, respectively.

More joy came Triple Eight’s way on Sunday. After narrowly losing pole position in Race 14 qualifiers to McLaughlin, Jamie Whincup provided more evidence for those calling him the greatest of all time, snatching back the lead after a Lap 16 pit-stop and hanging onto it for his first win of 2017.

So although McLaughlin still leads the drivers’ championship with 1,608 points, Whincup is just six behind him on 1,602. The win confirmed his status as King of Townsville; it was his ninth victory on the circuit, and he now holds the Supercars Championship record for 105 race wins, the podium record of 204 from 419 races, and the pole position record of 71.

Despite a malfunction in his coolsuit that left him sweltering in 50-degree heat, McLaughlin finished second, with Triple Eight driver Shane van Gisbergen in third. After another poor qualifier, Coulthard got stuck in the traffic and bashed about again, finishing 21st. He’s now 152 points adrift of Whincup in third on the ladder, with 1,450.

As could be expected, the weekend Supercars results have altered the futures betting on an outright championship winner. McLaughlin is still the favourite, although his odds have shortened to $1.20 on some sites, but Whincup is now second-favourite, at around $1.40-$2.50. Coulthard is at $2.50-$3.50. if you want to wager on these, and other Supercar races, sign up at Crownbet and take advantage of their great odds and wide array of betting markets.