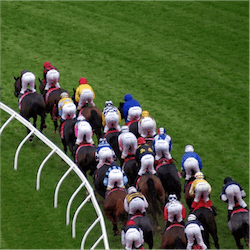 Horse racing Action On The Cards

Saturday 25 February 2017 will be the day of the Blue Diamond Stakes 1200m Group One sprint for 2 year olds at set weights and will be run at Caulfield. As the day gets closer and closer we start to see the emerging trends for this year’s event, and things are starting to heat up quite rapidly.

We have a wide open event this year with a few names popping up in the top 3 so far. We saw Jukebox jump up to first place with $7 but was not held onto for very long as just an hour later we saw Formality come in at $6. Tulip is in at $8 as the third choice and Catchy is in with a chance at $9.

David and Ben Hayes as well as Tom Dabernig are the proud trainers Formality, Tulip and Catchy. There are some difficult choices ahead as the performance difference between the 3 horses is so negligible that there are going to be some tough decisions made in the run up. Having too many great horses for a race is problem that most trainers can only dream about having!

This is another Group One event that is to be held at Caulfield Racecourse on February 25th 2017. It is a weight-for-age race and is a part of the Melbourne Autumn Racing Carnival. This race is seen as a middle sprint and have a total distance of 1400m. It is for this reason that the country’s best sprinters come out for the chance to have a shot at the $500,000 purse.

This event is limited to 16 starters but has only ever been fully attended with all spots being occupied twice before being back in 1983 and 1986. The field is traditionally announced on the Monday before the race so be sure to check back with us regularly for updates.

This year’s Oakleigh Plate has some fantastic opportunities for punters with the likes of Thermal Current who is tipped to have a great race. Jockey Damian Lane has ridden the 6-year-old with back to back wins recently and this looks to bode well for The Oakleigh Plate. The field has yet to be finalized but as things unfold we will bring you the latest news in the run up to this epic race.