Update on the National Hall of Fame Race day 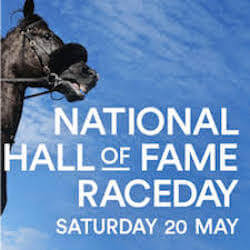 Latest on the National Hall of Fame Raceday

On Wednesday this week, Champion horses Light Fingers, Saintly and Winx were all inducted into Australian Racing’s Hall of Fame along with Jockey J.J. Miller and associate Lloyd Williams. This weekend, they will have races named after them in recognition of their recent distinction at the National Hall of Fame Race day on the 20th of May.

With Divine Quality pulling off another win in just her second start, most punters and horse racing enthusiasts have her pegged to make it three-for-three come the weekend. That being said, no fewer than four horses are sitting on the cusp of a hat trick in the Light Fingers Hall of Fame Trophy (1200m) including Hussy’s Glow, Wasabi and Miss Iano. If we thought this was going to be an easy race to predict, things have changed in a hurry.

Of the 15 race acceptors, a total of seven horses are last-start winners including the Tony Noonan trained Miss Siska and Divine Quality who will be ridden by Ben Thompson. This week, 16 acceptors were announced for the Listed Sprint. Five of them are first up. Three of those are Linsey Park-trained. If you can remember what happened with Redkirk Warrior in a straight sprint, there is no telling what Mihany, Tashbeh and Ruettiger might achieve on Saturday.

There are other runners who look good for the National Hall of Fame Raceday including Oak Door and Onerous. The Robert Smerdon trained Oak Door is on trial for a run in the Queensland Guineas as well as the Stradbroke Handicap. In the 2000m Archer Hall of Fame Trophy, Group 1 winner Ventura Storm is making his debut for Lindsey park. In the same race, Our Yangtze will be making his Australian debut after claiming two wins in England. In the 1400m Lloyd Williams Hall of Fame Trophy race, Radipole, a Stakes winning in France will get his first run in Australia for trainer Mike Moroney.

In the 1800m John ‘JJ’ Miller Hall of Fame Trophy race, trainer John Hickmott as well as both his sons, Robert and Michael all have a runner. Robert, the two-time Melbourne Cup winner, will be racing Granddukeoftuscany first-up. John will be bringing Flow Meter from Murry Bridge through to Flemington for a fourth time having racked up two decent runs in the past. Meanwhile his son Michael will be crossing the South Australia boarder with Lieder who has been in fine form winning two of his past four starts.