Who to Watch in Auckland Cup Week 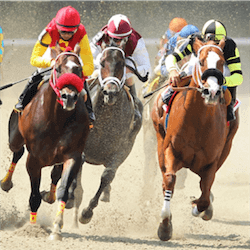 March 04 will see Auckland’s Ellerslie Racecourse host the 2400m New Zealand Derby, and lots of Australian racing fans will be following the fashion highlight and million-dollar action online. This Group 1 set-weights handicap for 3-year-olds saw a 2016 increase in prize money to $1m, which put it on a par with the Karaka Million. Derby Day remains a prestigious social event with which to launch New Zealand’s richest racing carnival: Auckland Cup Week.

Australia’s betting community will also be following the February form of several horses in contention for the Derby crown. Hall Of Fame, the colt that won the Levin Classic in January, is a strong possibility. He has won four of his five starts since October, and at the time of writing was about to jump off in the February 04 Waikato Guineas at Te Rapa, so punters should take note of how he performs over 2000m.

Early favourite Sacred Elixir may not be looking quite as attractive, after finishing fourth at Ellerslie’s Karaka 3YO Mile. However, he was bumped at the 300m-mark by eventual winner Volpe Veloce, so don’t rule the gelding out. Colt Savile Row, hopefully running in the 2000m Herbie Dyke Stakes at Te Rapa on February 11, is currently second favourite for the New Zealand Derby.

Can Jacksstar Deliver in Auckland Cup?

The Auckland Cup, the climax of Auckland Cup Week on March 11, is a $500,000 Group 1 race for 3-year-olds and older that is one of the premier races in New Zealand history, and certainly the one with the most beautiful Victorian trophy. At 3200m, it’s a test of stamina for the country’s top stayers.

Pentathlon, a 4-year-old gelding, is currently the favourite, followed by two 5-year-olds, mare Chenille and gelding Bloodstream as joint second-favourites. But outsider El Soldado won last year’s Auckland Cup, so anyone looking for a long shot might plump for Jacksstar.

The Gary Vile-trained 5-year-old gelding attracted some good betting for the Wellington Cup two weeks ago, but lost by a nose to Savaria. Over the same distance at Auckland, he could pull it off this time: at a very nice $50 win bet.