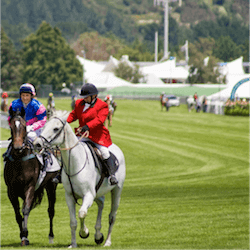 There are three ‘Black Type’ races, in other words featuring top-ranking thoroughbreds, on Classic Day that Australian sports betting enthusiasts may be keen on. Two are Group 3 races, each with a purse of $70,000: the Tui – Backing a Winner Since 1889 Anniversary Handicap over 1,600m, and the 2,100m Mills Reef Winery Trentham Stakes. The big race of the day, however, is the 1,600m Randwick Meats Levin Classic, a Group 1 race with a purse of $225,000.

Saturday, January 21, is Wellington Cup Day, now sponsored by the residential development just up the road from Trentham, Upper Hutt’s Wallaceville Estate. The famous best-dressed competition brings out the fashionistas for Wellington’s most glamorous race day, making it an event as much to be seen at as to see.

Bloodstream, a 5-year-old gelding, is currently the favourite for the feature race, which is back to its original two-mile distance at 3,200m. Despite a downgrade to Group 3, the Wellington Cup is still attracting a quality field of stayers. Bloodstream will have to see off competition from two other in-form geldings, 4-year-old Five to Midnight and 5-year-old Jacksstar, as well as the 4-year-old mare Fanatic.

Family Day at Trentham, the final meeting of the Wellington Cup Carnival on January 28, is also part of the Interislander Summer Festival. With general admission to the course as low as $10, and free entrance to under-18s accompanied by an adult, RWC has made an effort to create a genuine Family Day that everyone can enjoy. There will be bouncy castles, sack races, fashion shows and other entertainment for the youngsters, along with stage performances, on-track events and great racing for the adults.

The two races of most interest to Australian punters on this final day of the Wellington Cup Carnival are both run over 1,600m: from Group 3, the $70,000 Wellfield Desert Gold Stakes, and the Group 1 Harcourts Thorndon Mile, with a total purse of $200,000.