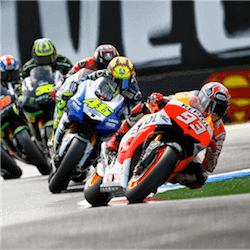 British MotoGP Venue Up for Grabs

Doma Sports CEO Carmelo Ezpeleta has confirmed that the company’s contract with the Circuit of Wales has collapsed, as the project does not have the finances to begin construction of the circuit. Doma Sports runs the Formula 1 MotoGP championship, and the original contract was a 10-year deal started in 2014, under which Circuit of Wales would organise the British MotoGP under lease on the Silverstone circuit until 2019, after which it would move to the newly constructed track in Wales.

With that plan no longer happening, and the race confirmed to stay at Silverstone until 2019, the venue for the 2020 British MotoGP is now up in the air. The situation is causing plenty of comment from racing fans, MotoGP pundits and punters alike. Ezpeleta appears to favour business as usual at Silverstone, but not everyone agrees with him.

Donington Park Back in the Running

Donington Park was supposed to start a 17-year contract hosting the British MotoGP in 2010, but ran out of money with a half-renovated track that couldn’t be used for any racing at all. It went into administration, but has now recovered and is properly refurbished and modernised.

Management was still insisting in January that Donington Park has no intention of bidding for the British MotoGP. However, that intention may change under Donington’s new owners, MotorSport Vision, now that Circuit of Wales is out of the picture, especially as Formula 1 boss Bernie Ecclestone is known to be considering the alternatives to Silverstone. Brands Hatch in Kent is another famous circuit that may be considered, unless Silverstone puts in a determined bid for the 2020 race.

All the drama will play out, one way or another, over the next three years. At the moment, however, Aussie online betting fans will be more interested in this year’s race, which will take place at Silverstone on 27 August.

Marc Marquez, riding for Repsol Honda, is currently top of the 2017 F1 MotoGP ladder, and the odds-on favourite to win the championship. But Andrea Dovizioso, Maverick Vinales, Valentino Rossi and Dani Pedrosa are all still in contention, at odds of an outright championship win ranging from $4.00 to $22.00. They will all be strong contenders at Silverstone, too.