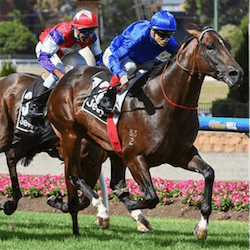 Night racing at Moonee Valley is great entertainment for Melbourne horseracing fans, and of course it offers punters all over Australia and the world the chance to join in the action online too. March 22 will see the final meeting at Moonee Valley in autumn, before the racing action moves to Sydney. The main race of the night is the Group 1 William Reid Stakes over 1200m.

The weight-for-age sprint for horses three years old and older has been run since 1925, and at night under lights since 1998. It currently carries a purse of $500,000 and has its field restricted to 14, so it always attracts some quality sprinters worth betting on. Despite the relatively short distance, the tight turns around the Moonee Valley track can produce some thrilling twists and upsets.

In the 2016 Oakleigh Plate at Caulfield, Fell Swoop lost by a nose to Flamberge. It is way too early to know the final acceptances for the 2017 William Reid Stakes yet, but Canberra trainer Matt Dale has indicated that he’s considering this year’s race for the 5-year-old gelding.

First, though, Fell Swoop will spend February and early March racing in Sydney and Melbourne, eager to make a comeback to his earlier form: one that saw him win eight of his first 10 starts between 2013 and 2015. His last race was the 1200m Group 1 Darley Classic at Flemington in November, where he finished third.

Apart from his 2016 Oakleigh Plate triumph, Flamberge is also, of course, the winner of the 2016 William Reid Stakes. Sadly, it was his last win to date: his next four starts saw disastrous results, with no finish above eighth.

However, last week the 7-year-old gelding made it back to a fourth-place finish in the Kensington Stakes at Flemington over 1000m. So if he keeps improving over the next few weeks and ends up in the final draw for the William Reid Stakes, he’s a sprinter punters might want to risk a flyer on.