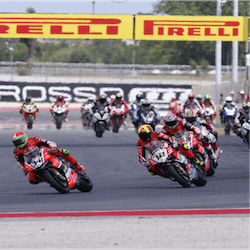 A lot of Australian motorsport fans enjoy World SuperBike action because the bikes used are souped-up versions of street motorcycles, not the elite custom racing machines of MotoGP. Betting fans who are also bikers feel more connected to this championship, so they’ll be looking forward to the 15th and 16th rounds of the 2017 championship this Saturday and Sunday in California.

The racing will take place on the Mazda Raceway Laguna Seca circuit near Monterey. Of special interest to Aussie punters will be the battle between British riders Jonathan Rea, Tom Sykes and Chaz Davies, currently first, second and third on the drivers’ championship ladder respectively.

Rea’s Odds Reckon He Has a Lock

Anyone fancying a futures bet on Kawasaki rider Rea as the outright winner of the 2017 championship should have had it locked in before the first round here in Australia, at the Phillip Island Grand Prix circuit in February. Currently on 296 points after winning eight of the 14 rounds he has raced in and finishing second four times, the odds being offered on Rea taking his third world championship in a row are now between $0.01 and $0.03.

However, on Saturday and Sunday in particular, Rea’s victory may not be the foregone conclusion some bookies imagine it is. Chaz Davies, riding for Ducati, won both rounds at Laguna Seca in 2015, only to see Rea and Kawasaki teammate Sykes triumph last year. Davies has won three rounds this year to Sykes’ two, but because he has suffered more retirements and failures to start, the Ducati rider is behind on the ladder.

With Sykes sitting on 246 points, trailing Rea by 50, and Davies even further back on 185, it’s going to take more than great racing for either challenger to unseat the reigning champion: Rea will need some bad luck, too. He had to retire in the first round at Donington Park in May, so Davies, certainly, will be hoping for more of that in the next 12 rounds.