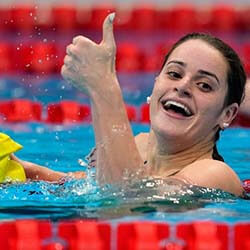 Olympic swimmer and prodigy Kaylee McKeown this week secured yet another medal for Australia following her smashing of the Olympic record on her way to the gold in the women’s 100m backstroke final.

During the qualifying events alone, the Olympic record for the event was broken an incredible four times. The record fell first when it was broken by Kylie Masse from Canada, then again when it got smashed by Regan Smith from the U.S., then once more by McKeown, and a final time when it got shattered by Smith (again) during the semi-final.

It would however ultimately be the Australian who would get as close as within two one-hundredths of a second to smashing her own world record for the event. McKeown’s triumph in the water saw the young star adding a third gold medal to Australia’s ever-rising Olympic medals tally.

Making up the podium alongside McKeown were Smith and Masse. Fellow-Aussie and two-time Olympic gold medalist Emily Seebohm finished fifth. The latter this week became only the second swimmer from Australia to compete in four Olympic Games.

McKeown said following the event that her legs had been hurting by the time there remained only the final 20 meters to go, but that dealing with this had been very much a part of her training. She expressed gratitude at having come away with yet another medal for Australia and personal victory for her own sporting career.

Seebohm, by now an Olympic veteran, commented on McKeown’s victory by referring to the win as exceptionally special.