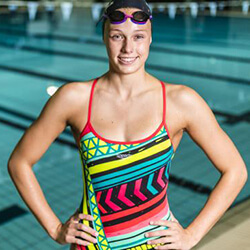 Australian Minna Atherton has become the first woman to finish in under 55 seconds for the 100m backstroke as the London Roar won once again for the International Swimming League. The 19 year old, who had also claimed victory for the 200m and 50m backstrokes, recorded a time of 54.89 seconds, setting a first World Record in ISL history. British Adam Peaty claimed the fastest 100m backstroke lap time of the year. The 23 year old, who had missed London Roar’s last win in Lewisville, clocked a time of 56.19 seconds while swimming in Budapest.

London Roar finished with a total of 505.5 points, with Iron second on 425, and LA Current in third place with 408. Atherton, who had claimed silver while swimming at the World Championships in South Korea this year with a time of 58.85, told reporters that her win was amazing, and that she can’t believe it yet. Fellow Australian Elijah Winnington claimed the fastest time in the world so far this year with a win in the 400m.

Eight-time world champion Peaty won the 50m breaststroke with a time of 25.85 seconds, and pushed his team to victory in the 4x100m relay. He made an appearance for the 200m, and finished with a time of two minutes and 5.14 seconds, with Germany’s Marco Koch winning the race in 2:04.17. Talking about his win, he told reporters that they were entering into a new generation of international swimming.