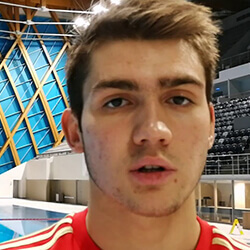 Ahead of the 2018 Youth Olympic Games, Russia has announced their 8-swimmer line-up. The Youth Olympics are set to be held in October in Buenos Aires, Argentina, and the Russian team is one of sixteen that have been given the green light to send an 8-swimmer team to the event. This is based on their point placement at the 2017 FINA World Championships.

Russia’s choice in swimmers is expected to be one of the strongest teams to take place at the event. Most nations regard the Youth Olympics as a second-tier event, meaning that they send swimmers from outside of their senior international and primary junior squads. Russia, on the other hand, will be sending the best that they have to offer.

One of those that will be included in the Russian team is Kliment Kolesnikov, who set the World Record in December for the 100 short course meter backstroke. Again in August, he took another world record with the 50 long course event at the European Championships, marking it his first senior World Record in long course.

Alongside him will be European Championship backstroker and butterflier Polina Egorova, whose highest finish was 11th in the 200 backstroke. Next is Andrei Minakov, who claimed 7 medals at the European Junior Championship this year, which consisted of 5 gold and 2 silver. Daria Vaskina, Daniil Markove, Elizaveta Klevanovich, and Anastasia Makarova will be part of the squad for the upcoming Buenos Aires Games.