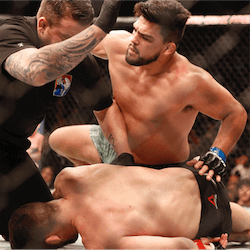 Kelvin Gastelum’s brutal one-punch knockout of Michael Bisping in the main event at UFC Fight Night 122 in Shanghai might have given MMA fans a moment for their ‘best of’ reels, but it has raised some immediate questions from pundits and commentators.

Firstly, some are asking, what was Bisping even doing in the octagon? The Gastelum fight was scheduled just 21 days after Bisping was choked unconscious as he lost the middleweight title to Georges St-Pierre at Madison Square Garden in UFC 217, after which the New York State Athletic Commission imposed a 30-day medical suspension.

Can Fighters Assess their Own Risks?

There’s been no clarification from the New York commission or the UFC as to exactly when that suspension was changed to seven days, as they have told reporters it was. Oxygen deprivation, followed a few weeks later by a probable concussion — because Gastelum’s haymaker really put his lights out — can’t be good for the former champ’s brain.

So far, critics are worried that UFC are hustling the 38-year-old English fighter towards an early retirement. If he keeps rushing into fights without waiting to recover properly, an early grave might be a bigger concern. The fact that he pronounced himself fit for the fight isn’t really a shield for decisions that are best taken by medical experts.

Actor, comic and renowned UFC commentator Joe Rogan was one of the voices prepared to call out the UFC openly. He said in a podcast that he didn’t think the match-up should have been allowed so soon after Bisping’s brutal bout against GSP.

Rogan believes the people around fighters have a responsibility to protect them from themselves. No matter how much Bisping wanted the Gastelum fight, he reckons, his family, trainers, management and even the UFC were the ones who needed to convince him otherwise.

It’s a debate that will no doubt continue, while Bisping looks to find that one more big fight he can retire on. Here’s hoping he waits a while and lets his brain recover first.