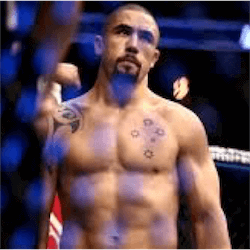 Nothing exposes the quirky workings of UFC as an organisation quite like the convoluted story of how Yoel Romero, last Sunday at UFC 221 in the Perth Arena, got to establish himself as the next logical challenger to Robert Whittaker for the middleweight championship.

For Aussie betting fans still a little confused by how it came about, a recap: when UFC 221 was first announced, the headline bout was supposed to be Georges St-Pierre vs Robert Whittaker. Canadian GSP was the reigning champion, while Aussie Whittaker was the interim champ.

But then in December, barely a month after winning the middleweight title, GSP got hit by a bout of ulcerative colitis, and vacated the belt because the condition could keep him out of the sport indefinitely. So the UFC converted Whittaker’s interim title to the Full Monty, and started looking around for a replacement challenger.

The duly anointed was Californian Luke Rockhold, the No. 3 contender. But then on January 13, less than a month before UFC 221, Whittaker also pulled out over an undisclosed injury. He kept the title, though, so the UFC created another interim title for Rockhold to fight for, because they want every UFC night to be headlined by a title bout, unless absolute legends are on the bill.

Romero Roped In to Fight Rockhold

To replace Whittaker, they brought in veteran 40-year-old Cuban Yoel Romero to dispute the interim title. But he couldn’t make the weight by fight night, so in the end only Rockhold was fighting for the interim middleweight title, and that didn’t end well.

After a patient, probing first round on Sunday night in Perth, as both fighters took each other’s measure, the second round exploded into action. Romero was advancing aggressively and peppering Rockhold with punches that had the American backing off and looking vulnerable.

Less than two minutes into the round, the Cuban landed a haymaker to the temple that dropped Rockhold like a sack of meat, followed by another blow to his head as he half-sprawled, eyes-wide-shut, against the ropes and the canvas.

The result was a knockout for Romero, taking his UFC record to 9 wins from 10. The victory also makes him the obvious next challenger, should he be able to get his weight down, for Whittaker’s middleweight belt.