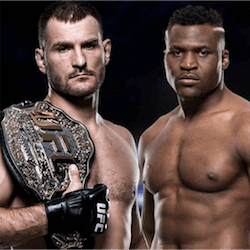 MMA fans expect a blistering bout at the top of the card at UFC 220 at the TD Garden in Boston, USA, which Australian punters can watch live on Sunday morning. Reigning UFC heavyweight champion Stipe Miocic defends his title against hard-punching number-one contender Francis Ngannou.

Miocic, born in Columbus, Ohio, the son of Croatian immigrants to the USA, has a record of 17 wins from 19 fights, 13 of them by knockout. He’s been knocked out once, and lost another fight, against Junior dos Santos in 2014, to a unanimous decision. The 35-year-old part-time volunteer fireman has held the UFC title since he defeated Fabricio Werdum at UFC 198 in May, 2016, and has defended it twice to date.

Ngannou’s story is much more rags-to-riches. He grew up impoverished in the village of Batie in Cameroon, Africa, working in a sand quarry from the age of 12. As a young man, he got into boxing as a way to avoid local gangs. At the age of 26, penniless and homeless, he arrived in Paris to pursue the dream of being a professional boxer.

Ngannou Favourite, but It’s a Close One

In 2013, Ngannou made the switch to MMA, winning his professional UFC debut in December, 2015, by a second-round knockout. He’s had 12 MMA fights, with one loss by unanimous decision early in his career, but he’s never lost or drawn in the UFC octagon.

The 31-year-old French-Cameroonian is the favourite in the betting for UFC 220, at around $1.50, with Miocic at around $2.50. But the two heavyweights are pretty evenly matched, with Miocic also packing some punching power, so it looks like an epic scrap.

The other title fight on the UFC 220 card is the light heavyweight bout between Louisiana’s Daniel Cormier, the reigning champion, and Switzerland’s Volkan Oezdemir, also the number-one contender.

Cormier’s record stands at 19 wins from 21, six by knockout, while Oezdemir has 15 wins from 16, with 11 by knockout. However, the challenger is 10 years younger than his 38-year-old American opponent; at $3.50 versus Cormier at $1.30, he might prove a rewarding bet.