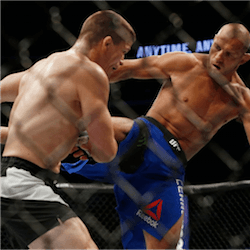 Australian sports betting fans who enjoy punting on MMA action have more than enough to entertain them on Saturday, 21 October, when Gdansk, Poland hosts UFC Fight Night 118. With eight bouts on the preliminary card and four top match-ups on the main card, there’s plenty to bet on.

The headline bout on the main card is the welterweight bout between UFC World No. 6 Donald Cerrone and rising Liverpool star Darren Till. The 34-year-old American from Ohio, with an MMA record of 32 wins, 9 losses and 1 no contest in 42 bouts, has a wealth more experience than the 24-year-old Englishman.

Till has fought 16 times undefeated, taking 15 wins and a draw. Of those wins, 9 were by knockout and 2 by submission, compared to Cerrone’s record of 8-16 in his 32 victories. A win for Till would open doors for him in the welterweight division, but despite his unbeaten record, he has never yet faced an opponent as good as Cerrone.

The main card in Gdansk’s Ergo Arena includes a women’s strawweight bout between ‘Polish Princess’ Karolina Kowalkiewicz and New Mexico, USA’s Jodie Esquibel. Kowalkiewicz has 10 wins from 12, compared to the American’s 6 wins from 8, and both women have 2 losses and 1 KO win on their records. The Pole will be the crowd favourite, and betting sites agree: she’s at $1.22 compared to Esquibel at $4.25.

The crowd will also be rooting for homeboys in the two other main card bouts, starting with Jan Blachowicz v American Devin Clark in the light heavyweight division. The Pole is considered the underdog at $2.25, but he’s not rated that much less likely to win than Clark, who’s at $1.63.