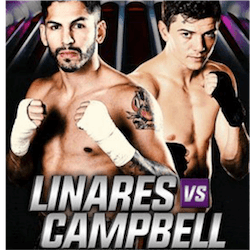 Many English boxing fans will be pinning their hopes, and their bets, on Hull boy Luke Campbell at The Forum in Inglewood, California, on Saturday night. The 29-year-old Yorkshireman took gold at the 2012 Olympics while still and amateur, and he remained undefeated in his first 11 fights after turning pro in 2013.

Now with a career record of 17 wins from 18 fights, 14 of them by KO, Campbell’s only defeat to date was at the hands of Yvan Mendy at the O2 Arena in London, in 2015. The Frenchman also became the first boxer in Campbell’s pro career to put him on the canvas, although he got back up and finished the fight, which went to Mendy on a split decision.

Campbell has previously held the Commonwealth and WBC Silver lightweight titles, but Saturday’s fight against Jorge Linares is his chance to claim the WBO and Ring magazine lightweight world championship belts. It would be a fitting highlight to a career that, although successful since he turned pro, hasn’t really achieved the heights that fans of the amateur Campbell were expecting.

Campbell has a number of excellent boxing skills that will impress punters backing him to win: he’s an intelligent fighter with superb footwork, and he has a very fast punch. However, Australian sports betting fans should take note of the fact that betting sites are offering him at $3.00 and above, with Linares odds-on at $0.25 or less. It’s not hard to see why.

The Venezuelan has won four world championship belts in three weight classes, and with a career record of 45: 42-3-0 (27 KO), he has more wins by knockout than his British opponent has had fights in his entire career. He’s only three years older than Campbell, and despite the Englishman’s slight advantage in height and reach, Linares has all the same qualities that have fans backing Campbell: namely, speed, intelligence and footwork.

He also punches harder, and has the experience to out-fight the Englishman. Never say never, however: Campbell certainly isn’t intimidated by his underdog status, and the fight will go to the better boxer on the night. Whoever that turns out to be, punters can be sure of an intense scrap.