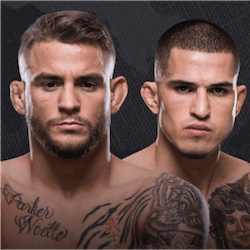 The 28-year-old from Lafayette, Louisiana, Dustin ‘The Diamond’ Poirier, was looking dominant early in the fight, opening profusely bleeding cuts on Anthony Pettis’ face by Round 2.

Pettis, the 30-year-old from Milwaukee, Wisconsin, will feel somewhat aggrieved that referee Keith Peterson chose to stop the fight to evaluate his bleeding at the exact moment he had Poirier in a potential triangle choke, as he was arguably set up at that point to win the bout.

When cleared to fight on, he had lost the position, and a combination of blood and sweat made The Diamond too slippery to get back into a submission hold. But Poirier wasn’t dishing out all the punishment; both fighters looked the worse for wear after Round 2.

The end came dramatically 3 minutes and 8 seconds into Round 3. Grappling to achieve a full mount on the mat, Poirier broke one of Pettis’ ribs, forcing an instant submission from the former WEC and UFC Lightweight champion. Recorded as a TKO, the win boosts Poirier’s UFC record to 14-4, with Pettis now on 7-6.

UFC Fight Night 120 also saw two knockouts: Matt Brown’s elbow put Diego Sanchez’s lights out in Round 1 of their fight, and a pole-axing blow from Raphael Assuncao dropped Matthew Lopez in Round 3.

There are plenty of good fights on the UFC Fight Night 121 card featuring both Aussie and international fighters, but punters can expect a brutal heavyweight main event between Brazilian Fabricio Werdum and Poland’s Marcin Tybura.

Neither man has ever submitted in a UFC fight, and both are coming off wins in their most recent match-ups. Former UFC Heavyweight champion Werdum, who also holds championships and black belts in Brazilian jiu-jitsu, Judo and Muay Thai, has six knockouts in his 22 wins from 30 fights, with one draw.

Tybura, a former M-1 Heavyweight champion, is eight years younger than the Brazilian 40-year-old, with a record of 16 wins from 18, seven of them knockouts. Werdum is odds-on favourite in the betting, at around $0.30, but the Pole could have a surprise up his sleeve, at $2.60.