Three Titles On the Line at UFC 217 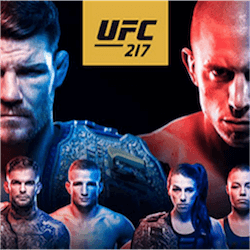 Bisping has defended the title only once, beating Dan Henderson via a unanimous decision at UFC 204. Online betting sites are offering him at around $1.95 to beat St-Pierre in outright futures, but he’s the underdog. St-Pierre, whose MMA record stands at 27: 25-2-0, hasn’t fought since UFC 167 in November 2013, when he successfully defended his welterweight title for the ninth time.

He voluntarily vacated the title to take a break from MMA a month later, and his hiatus was complicated in February 2014 by a knee injury during training that required surgery. His return is being eagerly anticipated by fans, and he’s as low as $1.85 in the betting. As the odds indicate, however, this one is going to be close.

Two More Titles on the Line

The UFC 217 main card has two other title bouts to entertain punters on the main card. UFC Bantamweight Champion Cody Garbrandt is defending his belt and his undefeated record in 11 fights against fellow American TJ Dillashaw. The champ is the favourite, at around $1.65 in early betting, with Dillashaw offered at $2.25.

The contest looks a little more one-sided in the third championship bout, between Polish UFC Women’s Strawweight Champion Joanna Jedrzejczyk and America’s Rose Namajunas. Undefeated in 14 MMA fights, with a solid amateur Muay Thai and Kickboxing record as well, the defending champ is the heavy favourite against her much less experienced opponent. Betting sites are offering $1.23 on Jedrzejczyk, and $4.15 on Namajunas.

Apart from seven undercard bouts, there are two more fights on the UFC 217 main card. In the middleweight division, the USA’s Johny Hendricks is the $2.75 underdog to Brazilian Paulo Borrachinha at $1.45. Welterweights Stephen Thompson and Jorge Masvidal could be more evenly matched, with Thompson offered at $1.62 compared to Masvidal at $2.30.