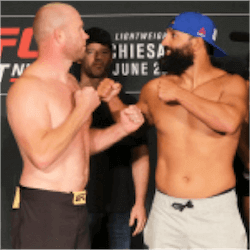 Aussie sports betting fans and Ultimate Fighting Championship enthusiasts were entertained with plenty of action at UFC Fight Night 112 on Sunday night, hosted in the Chesapeake Energy Arena in Oklahoma City. However, a controversial finish to the night’s headline bout left many spectators upset, because they are convinced an over-solicitous ref may have awarded a technical submission in error.

The fight was the lightweight bout between 24-year-old Kevin Lee from Michigan, and 29-year-old Coloradan Michael Chiesa. Lee looked the better fighter throughout the first round, but 4 minutes and 37 seconds in, when he had Chiesa in a rear-naked choke, referee Mario Yamasaki declared a technical submission and awarded the victory to Lee.

Two Views of the Footage

Watching repeatedly on video, UFC Fight Night fans have developed two versions of what’s happening in the final seconds of the match. One group insists that Chiesa’s left arm has gone limp, signalling the onset of unconsciousness, meaning Yamasaki is right to step in and declare a technical submission, to protect the fighter.

Those who had money on Chiesa, on the other hand, are convinced that his arm isn’t going limp; he’s simply looking to put his elbow down so that he can turn and stand up. Whether Chiesa was denied a chance to counter-attack by over-zealous reffing or not, the result stands: Lee now has 16 wins from 18 Mixed Martial Arts fights; nine of them from UFC Fight Nights.

Fines and Upsets on the Undercard

The most convincing win of Sunday night came in light heavyweight bout between the USA’s Dominick Reyes and Denmark’s Joachim Christensen. Reyes need just 29 seconds in the first round, and a flurry of devastating punches, to beat the Dane on a TKO. His lightning win earned Reyes the Performance of the Night bonus.

All in all, there were 13 fights on the card, eight of which went the full three rounds to a decision. Tim Boetsch took another TKO to beat Jonny Hendricks in Round 2 of their catchweight bout, rescheduled from a welterweight match when Hendricks weighed in at 188kg. As a result, he paid 20% of his loser’s purse to Boetsch as well.